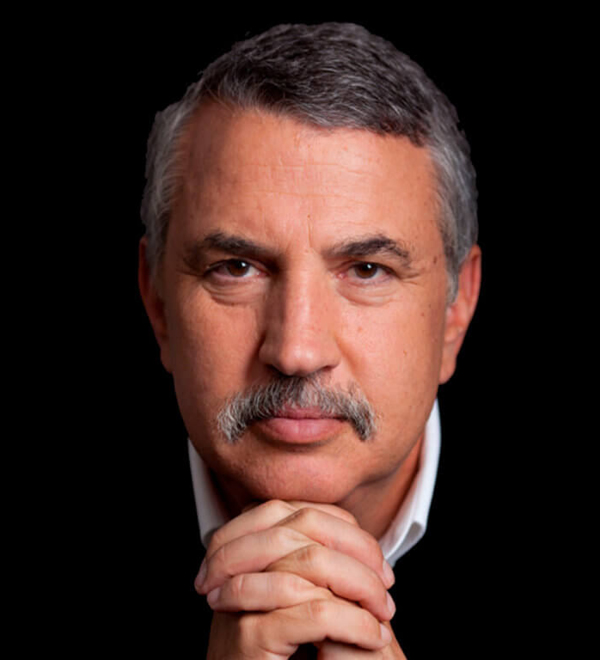 Thomas L. Friedman is an internationally renowned author, reporter, and, columnist—the recipient of three Pulitzer Prizes and the author of seven bestselling books, among them From Beirut to Jerusalem and The World Is Flat.

Thomas Loren Friedman was born in Minneapolis, Minnesota, on July 20, 1953, and grew up in the middle-class Minneapolis suburb of St. Louis Park. He is the son of Harold and Margaret Friedman. He has two older sisters, Shelley and Jane.

Harold Friedman was vice president of a ball bearing company, United Bearing, started by a friend after World War II. Margaret Friedman, who served in the U.S. Navy in World War II and studied home economics at the University of Wisconsin, was a housewife and a part-time bookkeeper. Harold Friedman died of a heart attack in 1973, when Tom was nineteen years old. Margaret Friedman, who was also a Senior Life Master championship bridge player, died in 2008.

Fun fact: St. Louis Park was immortalized in the 2009 Coen brothers movie, A Serious Man. Friedman, Ethan and Joel Coen, Senator Al Franken, political scientist Norman J. Ornstein, NFL football coach Marc Trestman, and Harvard University philosopher Michael J. Sandel all grew up in or near St. Louis Park in the 1960s—and most of them went to St. Louis Park High School and the local Hebrew school. The Coen brothers once compared St. Louis Park to the small region in Hungary that had produced numerous nuclear physicists and Draculas.

All sessions
by Thomas L. Friedman